The original source code includes a function called CryptData() which is used to decrypt a stream of bytes using a global decryption key. The decryption is done through a simple XOR with the key four bytes at a time, with some additional logic to handle streams that aren’t a multiple of four in length. As the bytes are decrypted, a check value1 is also computed and is used to verify valid decryption for level 4.

The exact steps to generate the decryption key are:

Valid registration data will always result in a key of 0x1E42A71F which is used to decrypt levels 4 through 10 before decompression.

Even though Jonas released the registration information for free, I thought it would be fun to generate new registration codes.

Because gKey = name ^ code, and XOR is its own inverse, we can compute registration codes easily with code = gKey ^ name. The process is very similar to the above. Given a name of at least 4 characters (stripped of whitespace):

Because the mask2 is just a repeated byte, and is also appended to the registration code, there isn’t any way to know how Jonas originally generated these codes. I chose to sum the bytes in the name mod 0xFF to generate the mask byte. As a concrete example, let’s use my name: NATHAN.

The last four characters of my name are the integer 0x5448414E. This number XORed with the key is 0x4A0AE651. Summing (mod 0xFF) the characters in my name gives 0xBB which creates the mask 0xBBBBBBBB. These numbers XORed together 0x4A0AE651 ^ 0xBBBBBBBB results in 0xF1B15DEA. The mask byte appended to this number (as a string) is the registration code: F1B15DEABB. 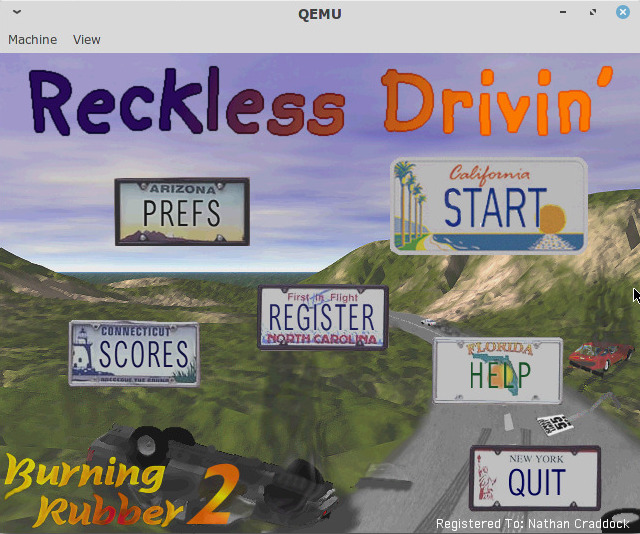 Using one of these codes I generated, we can see that the game (running in a virtual machine) shows my name in the lower right corner!

Because I am rewriting in Zig this is the second time I have implemented this decryption and registration logic. The first time the decryption code was written in C, and the registration code generator in Python. Implementing both in Zig was a good exercise. Here are some of my thoughts:

Sometimes Zig feels more verbose than C. Reckless Drivin’ involves a lot of bit casting, something that I once thought trivial in C. For example, Zig has forced me to acknowledge and specify the alignment of byte streams. Even though there is more up-front work than C, I really appreciate that the language is designed in a way to more precisely express to the compiler how I want to transform data. This has led me to write better code as I rewrite Reckless Drivin` in Zig.