This is the second time I have started writing about Open Reckless Drivin’, my attempt to reimplement Jonas Echterhoff’s Macintosh racing game. In my first blog posts (which I have deleted1), I attempted to describe the process of rewriting the game’s code in as much detail as possible. That was the wrong choice for many reasons, but mostly because my desire to share each step of the journey required enough effort to discourage me from writing as frequently as I wanted.

So I have started again with the goal to write more frequently, and not be focused on explaining everything that I do (the commit logs are better suited to that task anyway). Instead I will focus on what I find most interesting in the process of understanding and rewriting C code originally intended for PowerPC Macs. I hope this leads to more interesting posts. Besides, who really wants to read about restructuring a project from CodeWarrior to CMake and replacing Macintosh-specific types like UInt32 anyway?

An Introduction to Reckless Drivin'

Reckless Drivin’ is a simple top-down racing game created in 2000 by Jonas Echterhoff. The goal of the game is simple: drive to the end of the level as fast as you can, doing as much damage to other vehicles as possible, while avoiding the police. Originally released as shareware on the Macintosh, Jonas later released the game for free once he no longer found the time to update it for newer graphics cards. The last released version and a free registration code can be found on the game’s website. An archived interview with Jonas claims that the game had over 140,000 downloads by the year 2002. 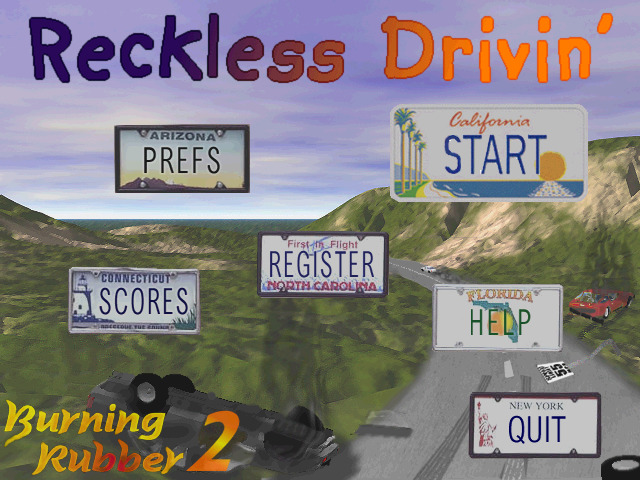 I enjoyed playing the game on my dad’s Apple PowerBook G4 when I was younger, but I could only play the first three levels because we hadn’t purchased the game. Years later when my dad gave me the laptop I found the free registration information Jonas had released and I was able to play all ten levels. That laptop is long gone, but Reckless’ Drivin remains one of my favorite games. Even though Reckless Drivin’ is simple, the homemade charm of the graphics and sound effects will always be a great childhood memory.

During the summer of 2020 I had the idea to try reverse engineering the Reckless Drivin’ binary so I could play the game again. Not knowing how difficult that task would be I started learning some reverse engineering basics. In this searching I stumbled across a GitHub repository, where Jonas had uploaded the original source code for Reckless Drivin v1.4.4 the year before. This made reversing the game a more reachable goal, and I immediately cloned and started cleaning up the code. Thank you Jonas for open-sourcing the game!

The Road to Open Reckless Drivin'

I’m writing this post over a year later, with many of the difficult reimplementation tasks completed. I plan to write some posts in the coming days on the following topics that I found most interesting in the last year of development.

There is still a ton of work left before Open Reckless Drivin’ is playable. Currently the game loads the preferences file from disk, reads the game data into memory, and checks for valid registration information. I am in the process of implementing the game loop, starting with drawing sprites to the screen with SDL. If you are interested in helping, and aren’t intimidated by the idea of grokking an old codebase loaded with Hungarian notation globals, then feel free to contribute!

I hope to post more updates of the project’s status here. This time I’ll take care to only share what’s interesting rather than overwhelming myself with the goal of sharing everything! 😄