Reckless Drivin’ is a shareware Macintosh game released by Jonas Echterhoff in 2000. Jonas released the source code on GitHub in 2019, but the game is difficult to compile due to the dependency on deprecated Apple system calls and the CodeWarrior project structure. I have been working on Open Reckless Drivin’ off and on over the last couple years to modernize the code and release the game for all platforms, and my previous post about Open Reckless Drivin’ explains more about my goals with this project. This post shares interesting things I learned while unpacking the game assets from the binary file Jonas released.

While I used an Apple PowerBook G4 to play Reckless Drivin’ when I was younger, I never used a PowerPC Mac at an age when I could understand things like QuickDraw, Resource Forks, and LZRW compression. So this project has been a really interesting learning experience to understand what is now part of computing history. The project is far from finished, and I have had parts of this post written up for over a year now, so I figured I might as well finally share it in hopes that others will also find it interesting.

# Learning about resource and data forks

After cleaning up the source code of Reckless Drivin’, my first goal was to read the contents of the file called Data. This file includes the images, sprites, textures, level data, sounds, and other game assets. The commit that introduced the file is titled “resource fork”. The project’s readme says:

To be able to upload this to git… the resource forks of the rsrc files have been moved to the data fork.

Until this point I hadn’t ever heard of resource or data forks, so I turned to Wikipedia and archived Macintosh articles to learn more.

On some file systems, like Apple’s HFS+ that Reckless Drivin’ was developed on, files can contain forks. Forks are sets of data associated with the file in the file system. Although there was support for an arbitrary number of forks, most Macintosh software only used the data and resource forks. On PowerPC machines the executable was stored in the data fork, and the resource fork stored structured data associated with the file like icons, images, and sounds. These resource forks are essentially databases stored alongside an executable.

Each resource stored in the resource fork has a four-byte type identifier, usually a four-character label, and a two-byte ID number. An example resource type would be PICT for picture. This table lists some of the most common types of data stored in resource forks.

From C source code, a resource can be accessed with the following call, passing the type1 and the id:

# Extracting the resources with DeRez

Once I knew the resource data was stored in Data, I needed to find a way to read the file and see what it contained. Some searching led me to a Mac tool called DeRez used for decompiling resources. It happens to be bundled with Xcode command line tools, so I borrowed a friend’s Macbook, installed DeRez, and processed Data with it. The output format resembles xxd, with the hex bytes on the left and an ascii representation on the right. Each resource is listed in a data block surrounded by {} characters. Here’s a small2 portion of the decompiled output file.

Unpacking Data verified that all of the game assets were preserved, but I still needed a way to read the file in code. I couldn’t find any information on the resource file format, so I decided to write a small Python script to store the unpacked data in a more compact format of my choosing. Each resource is represented in memory by the following struct, which stores the type identifier, the ID number, and an array of data with its associated length.

Note that the integer sizes in this struct are larger than needed. I could repack the data to align with the exact integer sizes used for the type and ID, but that doesn’t really matter.

The output of the script took the bytes from the DeRez unpacked Data file, and placed them end to end with the headers from the Resource struct. This made it trivial to write a C program to iterate over the resources stored in the data file to find any resource given a type and ID. The next step was to find some meaning in the bytes.

Most of the game data is stored as Pack resources. These packs are read into memory by the uint32_t LoadPack(int num) function.

This function loads a Pack resource given an ID number and stores a handle in a global array. This function also contains two roadblocks to interpreting the resources:

Because decompression is needed for all Pack and PPic resources, that is what I will focus on for the remainder of this post. I will describe the process of decrypting the level data in a later post.

LZRW (Lempel-Ziv Ross Williams) is a family of compression algorithms created by Ross Williams that are focused on speed rather than high compression. Ross created seven variants of the algorithm before fears related to software patents caused him to leave the world of data compression behind. In 1997 he released all of his algorithms on his “compression crypt” website. Ross’ website is not always available online, so here’s an archived link to his homepage where the seven compression algorithms are located. A compression benchmarking repo on GitHub also contains the source code for most of the variants, with an additional header file to create a common interface for the different source files.

Unfortunately the Reckless Drivin’ source code shared by Jonas is missing the file for LZRW decompression. Ross Williams’ website includes all the source code for the algorithms, but there are seven variations, and Reckless Drivin’s code doesn’t mention which of the seven was used.

The variants all follow a similar interface, so I created a test program to load a pack and decompress it with the chosen algorithm. When compiling this program I enabled the address sanitizer in gcc with -fsanitize=address. With no other indication of success, I decided that If the pack would decompress without memory issues, then the LZRW variant worked.

At this point I thought this task would be simple: Decompress all the packs with each variant until one variant decompressed without memory issues. I soon found a problem because more than one of the variants succeeded without issue. Both lzrw3 and lzrw3-a would successfully decompress all of the files with no memory issues. Some of the other algorithms like lzrw1 would decompress some of the resource packs, but would fail with out-of-bounds memory accesses with other packs.

Because multiple variants decompressed successfully, I would now need to look at the bytes in the decompressed resource packs to determine if the data was decoded properly. Because the Pack resources are cast directly to various structs in Reckless Drivin’, it would be very difficult to find any obvious patterns in the data. So I turned to the PPic resources instead.

By looking at the function calls surrounding the uses of the PPic resources in Reckless Drivin’, I determined that the data was stored in the QuickDraw format.3 These images are used for the loading screen, menus, and credits screens in Reckless Drivin'.

QuickDraw is an Apple graphics library documented in Inside Macintosh: Imaging With QuickDraw which is helpfully archived on Apple’s developer website. This 822 page PDF file documents both the API for using QuickDraw, and the binary file format for the images when saved to disk. QuickDraw files contain a series of 2-byte opcodes that construct the image through lines, rectangles, polygons and other predefined shapes. Bitmap image data can also be drawn with QuickDraw. The PPic images were created with QuickDraw extended version 2, and the Imaging With QuickDraw PDF describes the opcodes starting on page 731. Some of the opcodes include

The QuickDraw format also specifies certain bytes that are stored in the header of the image:

With this information I thought I could look at the decompressed PPic files and look for header bytes like 0011 and 02FF to confirm that the decompression was successful. The QuickDraw PDF also contains a decompiled QuickDraw image on page 749 which was a great reference for comparing against the binary files.

Here is the header of PPic 1000 after decompression with lzrw3.

Comparing the two there are many similarities, and I began to be excited, but closer inspection showed that there wasn’t a perfect match between the expected header information, and what PPic 1000 contained. The 0011 and fffe bytes are in the file, but aren’t in the expected locations or alignments.

Another confusion is that the uncompressed PPic resources also contained the 0011 and fffe byte sequences, and were in some ways more aligned with the specification!

At this point my school studies picked up and I took a break from working on this problem. Months later I had the idea to decompile the binary found on Jonas’ website to see if I was missing any steps in reading the resource data.

Ghidra, an open source reverse engineering tool developed by the NSA is a wonderful resource for decompiling software. This isn’t the place to explain how to use Ghidra, but if you haven’t tried it, it is incredible. Within minutes I had the original LZRWDecodeHandle() function decompiled in Ghidra. 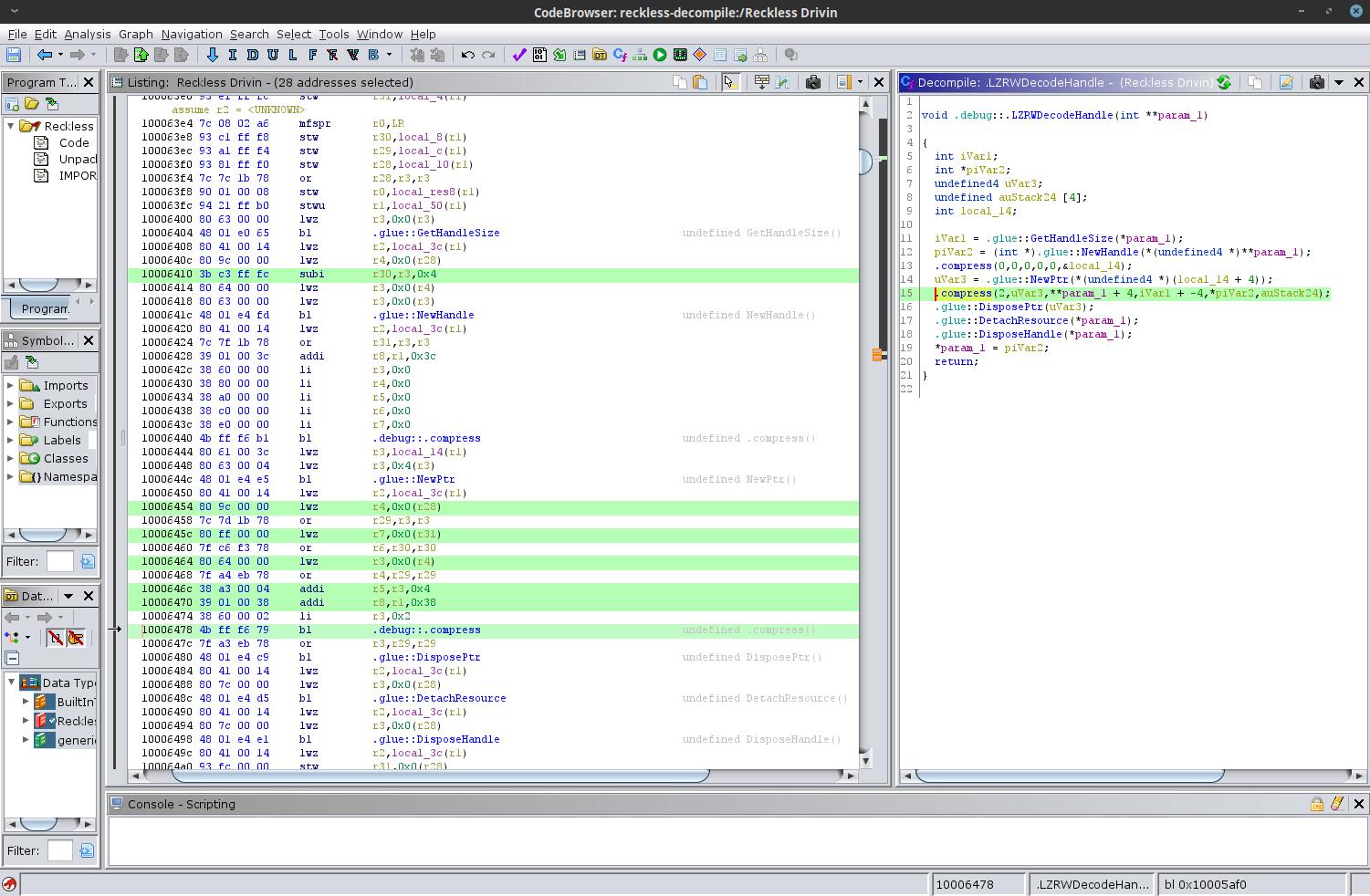 The highlighted line of decompiled code is:

This function call has the same signature as the one found in Ross Williams' code that I used when blindly reimplementing LZRWDecodeHandle(), but with one interesting difference that stands out. The first four bytes of the packed data are ignored, as indicated by the +4 offset to the array, and the -4 offset to the length of the array. I added the same offsets to my implementation and recompiled.

The following is PPic 1000 after decompression with the memory offset.

This exactly lined up with the format described in the QuickDraw specifications, with 0011 02ff 0c00 FFFE identifying this as an extended version 2 image, and the remainder of the header specifying the dimensions (640x480) and other metadata. This confirmed that the lzrw3-a algorithm was the correct variant! I was super excited, and this breakthrough motivated some very fast paced development on Open Reckless Drivin’ over the next few weeks.

Although at this point there still wasn’t anything besides bytes to show for all my work, it was both rewarding and motivating to have access to Reckless Drivin’s game assets in my reimplementation. This post has grown long enough, so I won’t describe the process of writing a QuickDraw interpreter until a later post. This process of unpacking the resource forks taught me a lot of interesting things about Macintosh computers, and I hope you found this interesting too!